Pacifiers: When and How to Let Go 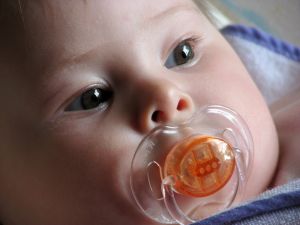 Nukie, nubby, nibs. Ah, the beloved pacifier. The pacifier brings peace to households and comfort to our little ones. It is natural for babies, during their first six months of life, to have the suck reflex. Babies will root towards their mother to feed and part of rooting includes sucking. Dr. Black, a member of the American Academy of Family Physicians says, "In terms of feeding issues, neurologically, young babies still want to suck. For example, a 4 month-old who can't eat solid foods will naturally need to suck. This basic neurology need can be easily satisfied…with many different pacifiers …in different sizes for different ages." Pacifiers satisfy a baby's need to suck in between mealtimes and provides soothing comfort. So when does pacifier use go from comfort to concern?

Researchers with the Academy of General Dentistry (AGD) have found a link between pacifiers and otitis media (acute middle ear infections) that affects up to 62 percent of children by their first birthday. Results from a study of 200 children ages 12 months or younger show that 36 percent of the pacifier users had ear infections, compared with 23 percent of the non-pacifier users. According to the AGD, otitis media can surface when viruses from nose and throat infections move from the Eustachian (auditory) tube to the middle ear. "Continuous sucking on a pacifier can cause the auditory tubes to become abnormally open, which allows secretions from the throat to seep into the middle ear," says Dr. Maria Smith, spokesperson for the AGD. "Transmission of bacteria in secretions would lead to middle ear infections. "The pacifier comes in contact with many microorganisms and may be a vehicle through which the unsanitary bacteria and viruses enter the child's oral cavity (mouth)."

Another study published in the September 2000 issue of the journal of Pediatrics looked at the effect of a parent education handout on the side effects of pacifier use and tips on how to limit pacifier use to nap and bedtimes. The results of the study showed continuous pacifier use decreased by more than 20% and ear infections dropped by almost 30% at the clinics where this education took place. Researchers found specifically that children who stopped using pacifiers regularly after 6 months of age had more than a third fewer ear infections than those who continued to use them. The journal's authors also suggest repeated pacifier use also could contribute to increased oral fungal infection and tooth decay. Doctors advise that pacifiers can spread germs if children share them.

For many parents, helping their children realize they no longer need the comfort of a pacifier can be the most difficult stage of the weaning process. Although there is no specific age a child should be weaned from her pacifier, The American Academy of Pediatrics (AAP) suggest starting by 10-12 months of age. There are some easy ways to help your child transition off of the pacifier.